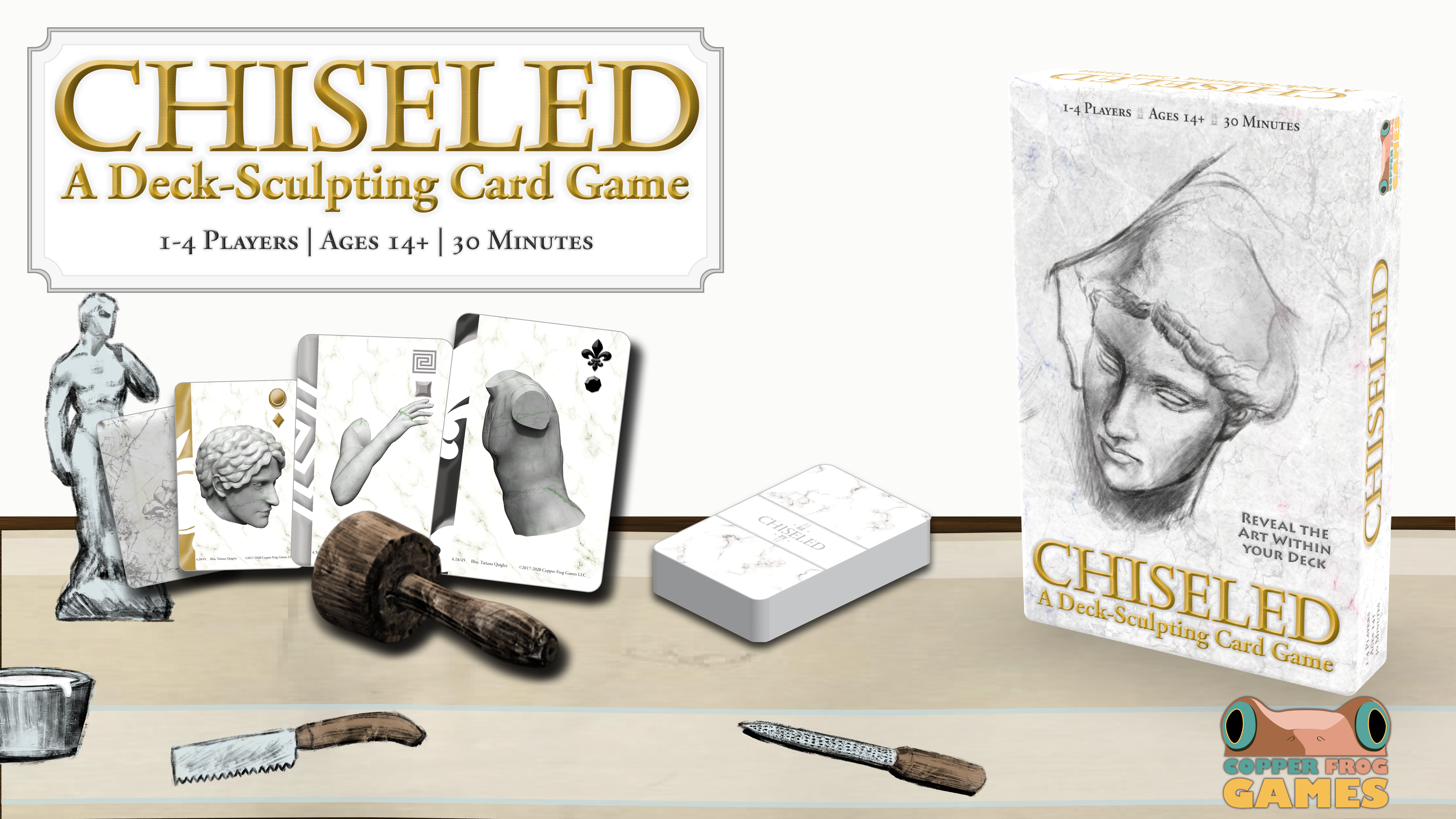 Latest Updates from Our Project:

CHECK YOUR KICKSTARTER-LINKED EMAIL FOR YOUR SHIPPING INFO LATER TODAY!

The proof of Chiseled has arrived stateside!

Yesterday afternoon the manufacturer proof of Chiseled arrived. We have requested some minor changes to 1 card, the back of the box, (more on that later) and making the insert a bit shorter and less snug in the box so it doesn't crack under pressure, but otherwise, it looks and feels awesome. The colors came out better than I expected on the box, (there's a subtle colored texture there that really draws your eye across the front), the cards look great, and the thickness on the player scoring mats is just right for standing up to repeated play. Pictures coming up now!  You can see its relative size compared to Pigment and a USPS small  flat-rate shipping box.

We are sending out the Backerkit surveys to everyone today, so keep an eye out for, (and complete) those surveys. You will have  the opportunity to add  on  more copies of the game, leave a tip,  etc., and additional copies will have  subsidized shipping still. Getting your address in accurately and promptly will ensure that we can deliver as soon as the games arrive.

Chiseled has attracted the attention of a co-publishing partner, who we will be working with to get the game into distribution via PSI! We're extremely excited to have Chiseled available in stores all over the country, and we'll have more info on that in the near future. Ask your local game stores to stock it, and it'll help us keep making games for you! To all our retailer backers, we'll be reaching out to you to get your games shipped once they're on the water.

With warehousing now taken care of, we're working out final shipping logistics for the pallets of games, and will give final approval on the manufacturing (and send final payment) within the next few days, ideally! From there it's 40 days to print, 30-60 days to ship to the States, and then it'll be done! We're a bit behind schedule for our planned September release, but it's worth it to get the best games to you. My guess before getting the final logistics info is that the games will be fulfilled by mid-October.

Chiseled is proceeding apace! We've submitted the files to our printer (Gameland), provided our down payment on printing, and are now awaiting the proof copy before printing a full run of copies of the game for you all!

Some folks may be wondering what the process of getting a game ready for print is like. Well, here's some screenshots to show what Chiseled looks like in Adobe InDesign, (a print layout tool that I use for assembling all my games, and an industry standard in professional game creation-- seriously, it's a crazy-powerful piece of software).

The rulebook is 12 pages, with new diagrams and a full Tool effect list. Here's the cover page:

The cards take up a 460-page document in raw form, (the game is 230 cards, fronts & backs), exported as fronts & backs. It's a big file, to  be sure, but part of this Kickstarter went towards upgrading to a new computer that can save big files like this faster. Here's an image of the card assets in layout form, plus what it'll look like cropped. The corners will also be rounded by the printer.

The box cover puts together 2 Photoshop files (the background texture and the cover illustration), in addition to InDesign stylized text elements. The outline will not be printed; it's just to show you how a box like this is put together. Jason Butera did a great job addilng depth to the initial illustration, and I hope you'll all enjoy the results.

Finally, let's talk upgrades! We've upgraded to a plastic insert, at no cost to you, and thanks to an improved quote from Gameland, we're going with blackcore cardstock after all. This provides better opacity on these pale cards, so you won't be able to see through when one is face-down or in your opponent's hand, and also provides a better snappy feel without making the card super-thick.

Regarding the pledge manager, I will be opening it up to the bulk of backers once we approve the proof copy of Chiseled. Again, this  is where you'll put your address, and add any other add-on copies or whatnot, so keep an eye out for that.

Hope this finds you all well, and I look forward to showing you the sample when it arrives. I expect it in about a week or so.

We've got one last piece of art to place, then Chiseled is done!

This update is to let all backers know that Chiseled is almost done! Manufacturing deals have been worked out, box size is approved, and we've decided to upgrade certain components based on these results, at no additional cost to backers. So let's not waste any time!

Chiseled is nearly done. There is one last piece of art that we're working with a great content creator on for the back of the box, to showcase all the great components. I expect that to be done within the next 3-4 days, and once it's in place, I will be sending the files to the manufacturer for a proof copy, and will post some screen shots of the behind-the-scenes process of getting files prepped in a backer-only update.

One thing we noticed in the "whitebox" sample we requested is that the paper insert we'd been counting on wasn't as strong as we'd have liked. While it holds all the cards (even sleeved), we're concerned that how the cards will be moving around in the insert will damage the insert, so I have decided to splurge on a plastic insert tray for Chiseled. It's still a very basic 4-segment design, but it should be more durable and just as light. And yes, it'll have thumbholes for removing cards from the tray like this one.

As far as the pledge manager goes, we will be finalizing international fulfillment in the next week or two, and then will be sending an email through Backerkit to get your addresses all loaded in. The Backerkit is open for preorders now for people who did not back during the Kickstarter; the shipping is slightly higher than during the campaign, but still less than it would normally cost to ship this game. One final note: I will be fulfilling US Kickstarter orders directly. Since there are relatively few backers, it's cheaper and easier to do it myself. We're still working out distribution paths, but I've got leads to follow up on once the files are submitted to the manufacturer.

WE ARE STILL ON TRACK TO SHIP BY THE END OF SEPTEMBER!

Thank you for your patience; this is very exciting to me, as I've been working on this game for YEARS and can't wait to see it on tables around the world!

Also, I've been working on other games, including both a remake of my first game, a cute game about dancing mice, and more. Follow us on Facebook for more info!

Thanks, be well, stay safe and stay happy,

As a follow-up to the last update, the labels I ordered FINALLY shipped today. The postal system has been in disarray from COVID-19, which I can't really do anything about, but I apologize for the delay. The labels should arrive tomorrow or Friday, and I'll have the final Pigment packages sent out by the end of the week, ideally.

While I've been waiting on that, graphic design has happened! The rulebook is almost entirely done, (I'll be posting that exclusively for backers once it's ready), and we've updated both the player boards and the body part icons. The final card layouts will be finished when the borders get finalized with these new icons, and then all that's left is the box. Check out the new, more descriptive body part icons below! The double-spiral, egg-and-thorn, and fleur de lis were very early additions to the game's visual language, but after several intensive playtests and some hard decisions, we have made the choice to go more literal for the Arm/Hand, Body/Torso, and Head icons.

Finally, Jason Butera has been hard at work on the custom Scrap illustrations for the Patron of the Arts-tier backers. These four illustrations look great, and I'm sending them to the backers today to confirm that they don't want any more revisions. Once they're approved, they'll be replacing half the Scrap in each of the four decks.

Until next time! We're still on-track.

Your Pigment copies are coming! Soon!

Hey all! As backers at the $65 tier may have noticed, I have locked the addresses of those receiving copies of Pigment and sets of hardwood meeples. They're all packed and ready to ship... Heck, I even printed the labels...

...or at least some of them. Turns out I was lower on labels than I thought, and the batch didn't entirely go through my label printer, (leaving me both out ~$50 in shipping, and also unable to actually mail the last ~18 packages). As such, SOME will be going out today, but others will be going to the post office when new labels arrive Saturday or Monday (ideally Saturday). I apologize for this error, but hope you'll forgive me when you see these awesome meeples and have a good game of Pigment! (As a note, the light brown meeples are the red oak, the dark brown are sapele, and the purple are [you guessed it!] purpleheart).

If you haven't played Pigment yet, I have a few copies remaining for sale on my website (copperfroggames.com), and will be shipping those until we run out. Spoiler alert: there's about half a case left after these go out! Be sure to check it out before they're gone; maybe I'll even toss in a stray meeple or two if you buy it this week. haha.

We are well on our way to getting all art polished, finalized, and on the cards! In fact, one of the last big pieces just arrived this week from Ali-- introducing the 8th Critic in the game, "The Merchandiser!"

Modeled after professional toy sculptor, Tabletop Backer Party group administrator, and, more importantly, awesome, friendly artist who did the body parts for Chiseled's main decks Tatiana Quigley, this professional is seeking to merchandise your sculptures as action figures and other toys! You'll need to have either no scrap or an even amount of scrap remaining to score her bonus!

For the next pieces that we're getting finished, the Scrap illustrations for Patron of the Arts backers, we'll be reaching out to them directly with sketches this weekend for approval. Once they're set, I'll post them in an update for all backers!

Thank you all for your patience during these trying times. Being cooped up and not working my normal day job has made focusing VERY difficult, but we're still on track to deliver on time for the Fall.